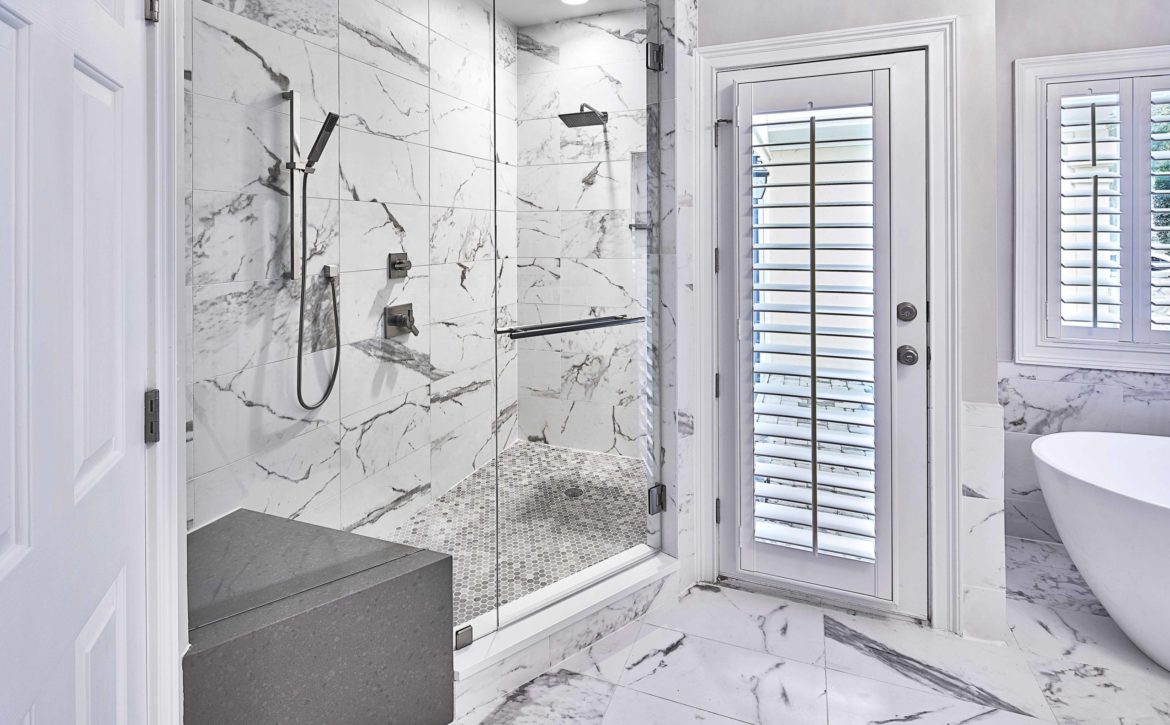 The 6 Most Popular Shower Upgrades

If we polled everyone in Charlotte and asked them to describe their ideal shower set-up, there would be more similarities than differences. We’ve pulled together a list of the six most common requests we get for shower upgrades anytime we remodel a bathroom—whether it’s for the owners or the kids. Many of these upgrades are just expected in modern shower designs, so while not technically necessary (hence the term upgrade), we consider them standard features.

The Oxford Dictionary defines a shower as, “an enclosure in which a person stands under a spray of water to wash.” You’ve probably been in a shower that’s as basic as that at some point or another, and while it’ll get you clean, it may not be an enjoyable experience. No one wants to start their day showering in a phone booth.

For years our clients were nervous about eliminating their seldom-used tubs in favor of larger showers with better features. They were afraid it would ruin their resale value. But given the choice of a phone booth shower and a large tub they never used or a decent-sized shower with no tub, most people are going to choose the latter. If there’s room for a great shower and a tub, that’s a bonus.

Gone are the days of suction-cup accessories from Bed, Bath & Beyond. Recessed shower niches are one of those upgrades that have become standard features, even in secondary bathrooms. While there are standard-sized inserts available, we prefer to frame most of ours on-site so we can control the exact size and placement for an integrated, custom look. As a general rule we line them up with the surrounding grout joints, but it really depends on the intention of the final design. The height placement will vary based on the chosen field tile and the height of the homeowner. Recessed niches in tub/shower combos in a kid’s bathroom should start about 30-36” from the floor (you want to be able to reach them while on your knees bathing a little one), while 42-48” may be more appropriate for the owners’ shower. 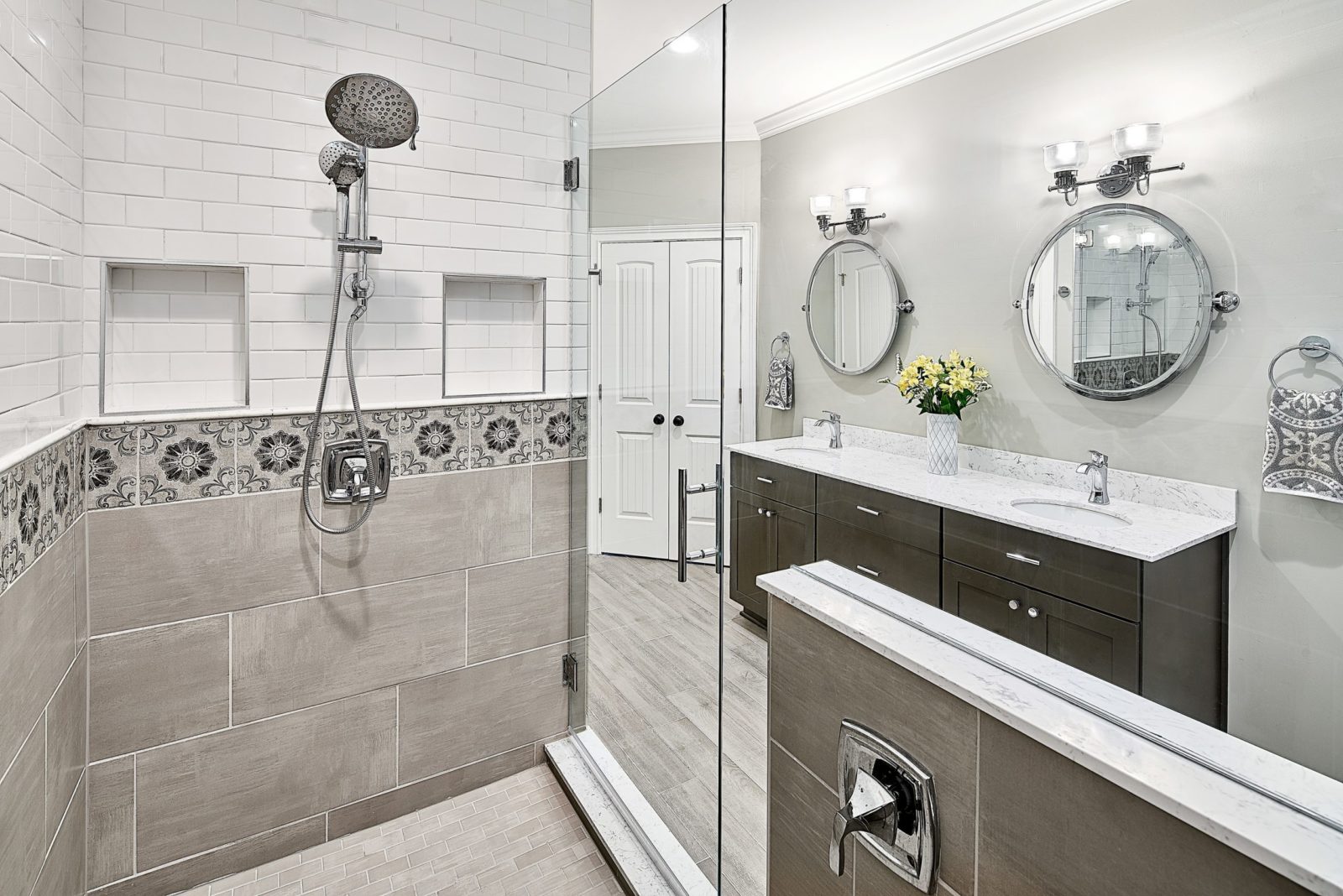 His and hers shower niches reduce product clutter and marital arguments. Win-win.

Built-in shower benches are another upgrade that’s become relatively standard. Whether it’s a corner bench or a long bench that stretches across the whole shower, homeowners of all ages enjoy the peace of mind they get knowing they could easily use their shower in the event of an injury or health condition requiring them to stay seated.

For easy maintenance, a cleaner look, and a more comfortable seat, we prefer using solid surfaces to top off our shower benches. Usually, we’ll use the same quartz or stone from the countertops to coordinate the shower with the vanity. 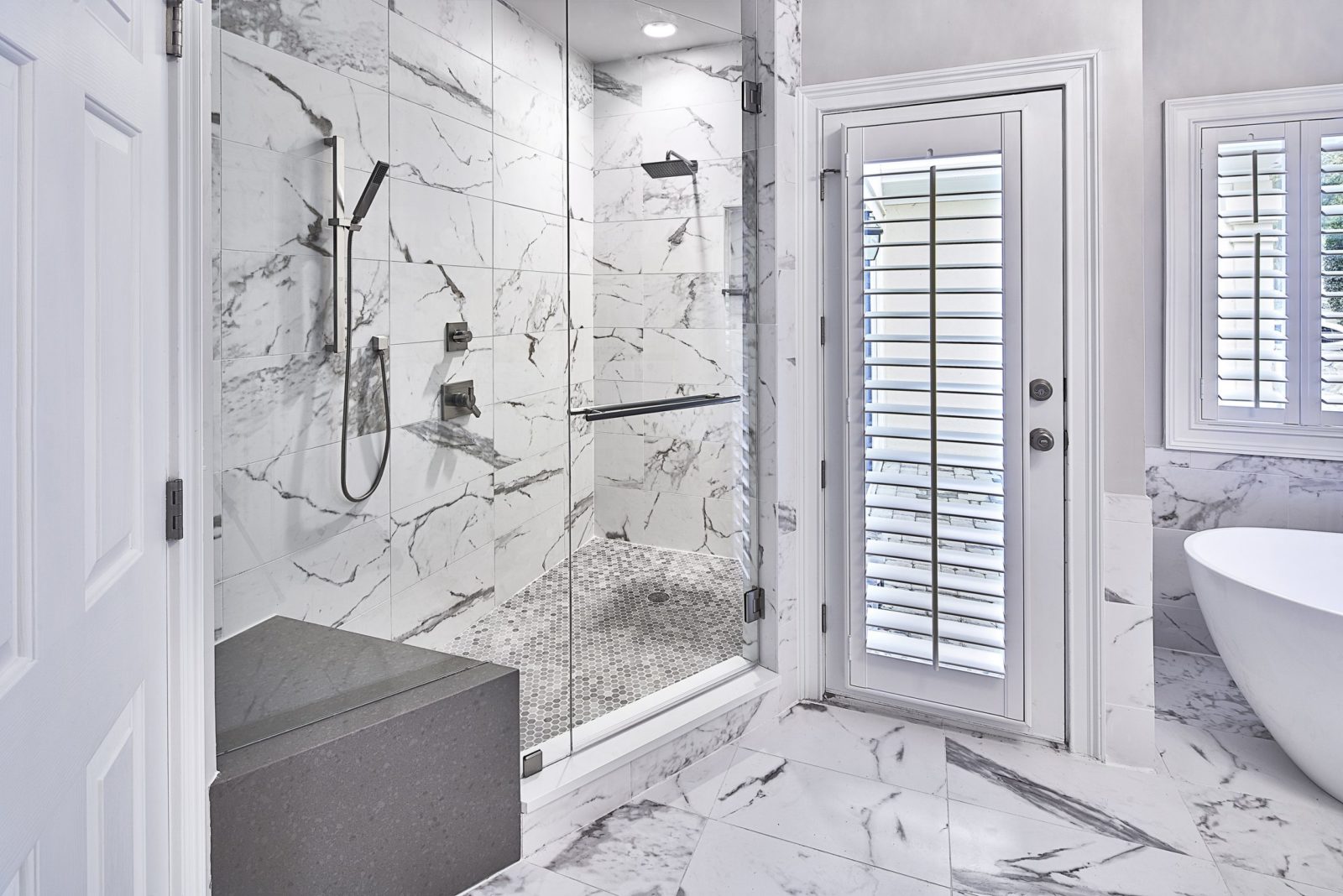 Not sure you really want an entire bench seat? Lower corner shelves made out of the countertop material make excellent foot props for shaving. Assuming your shower is large enough, an aftermarket shower seat would be a temporary option in the event of an injury.

We could write a whole post on shower plumbing alone, but the brief version is—Charlotte homeowners expect multiple shower heads in the owners’ bath. A fixed head and a handheld on a bracket or an adjustable slide bar are most common. A handheld shower is a necessity, if for no other reason than because it makes the miserable task of cleaning the shower easier and quicker. 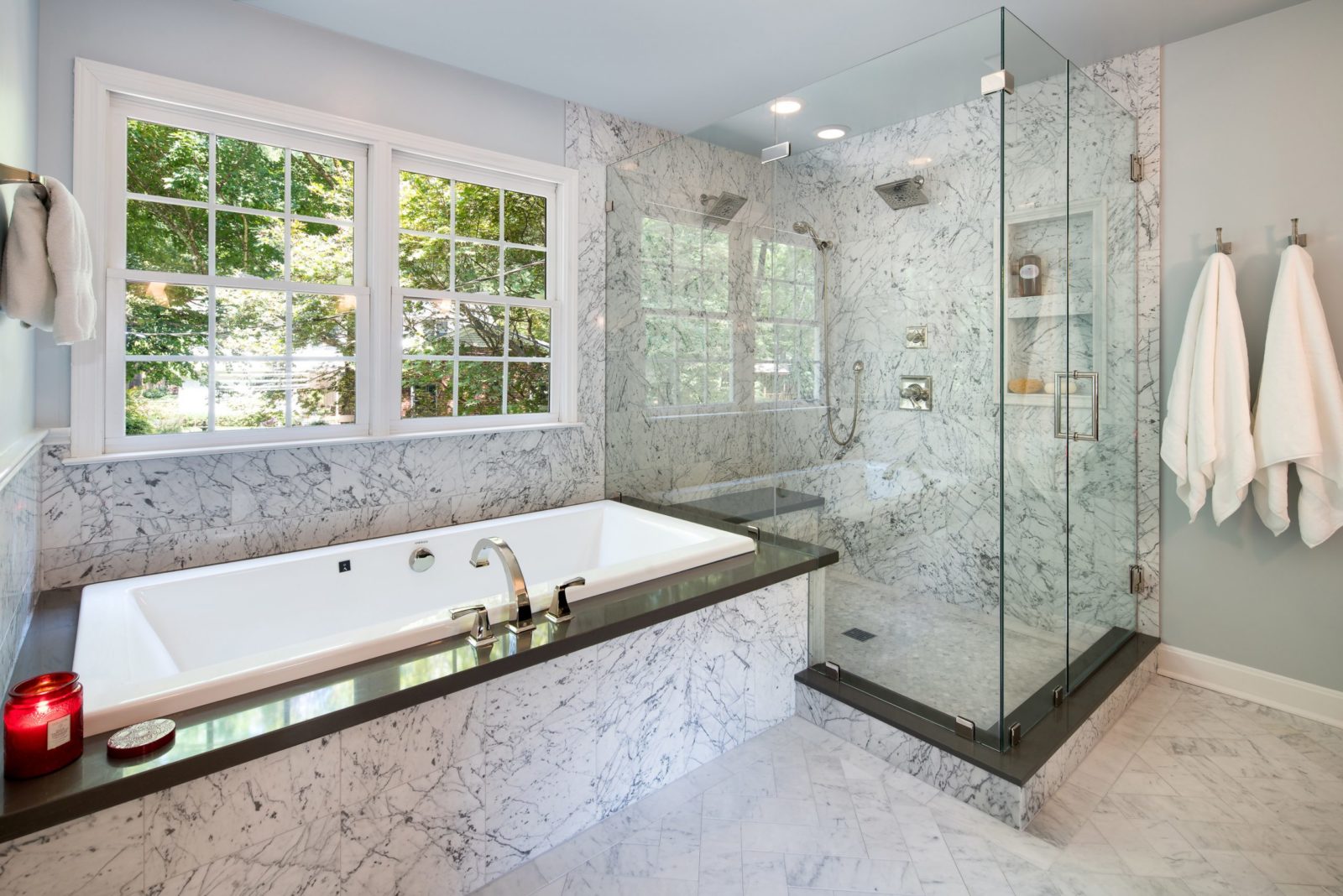 While it’s tricky to see through the glare, this shower features two fixed heads and a separate handheld.

While it may not be worth the investment to have two heads in the kids’ bath or the guest bath, there are now a variety of showerheads and shower columns that function as both a fixed head and a handheld all in one system, eliminating the need for an additional valve. These are also great for the owner’s bath if you’ve got a tight budget. We show two different installation methods for how to tackle these at our South End design studio.

Many of our clients intend to age in place as part of their active and healthy lifestyle. Decorative grab bars that coordinate with the rest of the plumbing suite provide safety in the shower without sacrificing style. Falls can happen at any age, so it’s a comfort knowing there’s something to grab if you slip. They’re also the perfect place for wet washcloths or bathing suits to drip dry.

Whether aging in place or just after a cleaner look, curbless showers are also gaining in popularity. The first four shower upgrades are minor in terms of the financial investment required to include them in your shower design, but a curbless shower requires a very strategic design and a decent budget. To drain properly, the shower drain must be parallel to the shower opening and the floor must slope to allow water to flow properly. Depending on the layout of the bathroom, this may not be feasible in an attractive way. Half walls are a great way to hide the build-up of the floor to allow for a one-directional slope. 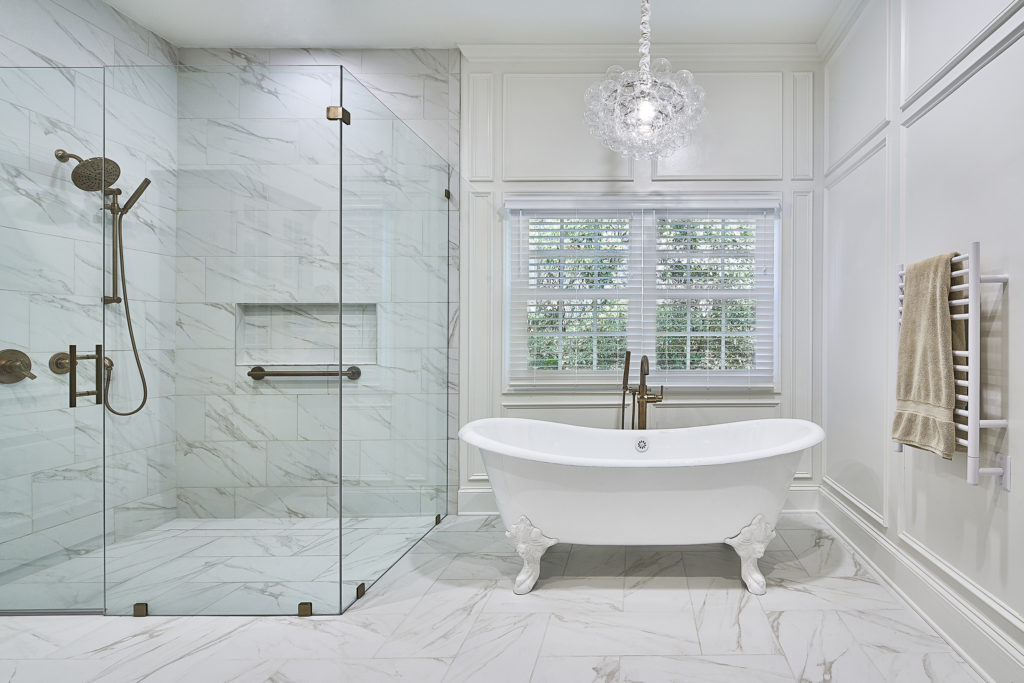 This project demonstrates how clean it looks to have a curbless shower. The linear drain sits across the back wall under the decorative grab bar.

When done properly a curbless walk-in shower allows for wheelchair access, and at the very least it eliminates a possible tripping hazard.

If you’re looking for the ultimate luxury shower upgrade, a steam shower is about as close to a spa experience as it gets. Steam showers have been proven to help our bodies detoxify and relax among other health benefits. Whether you steam first thing in the morning to wake up, after a hard workout to relax your muscles, or before a long soak in the tub, you’ll feel refreshed and rejuvenated. 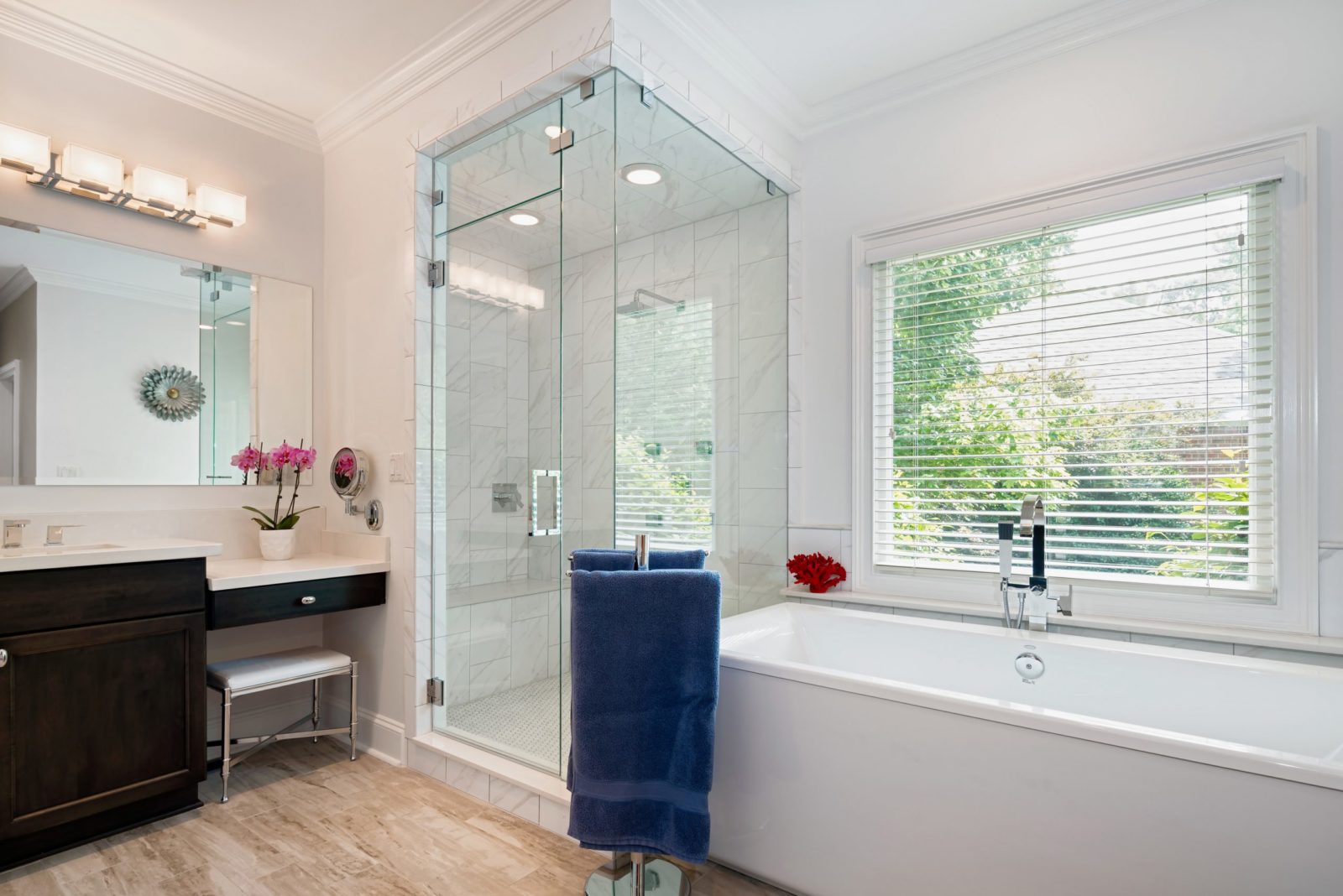 Our clients loved taking a relaxing steam after hitting the gym in the morning. You can see the dropped header and full-height glass that contains the steam.

Steam showers come with a larger price tag due to the extra material and labor involved to fully enclose the space—plus the cost of the actual generator. Typically, we’ll drop the shower ceiling or build a dropped header with a pivoting glass transom over the shower door. In either scenario, it will require more glass and tile than a standard shower. Don’t forget you’ll want a built-in bench to sit on while steaming and a really powerful exhaust fan to get the steam out effectively once you’re finished.

Shower Upgrades: Other Options to Consider

Regardless of how fancy you want your finished shower, there are a few other things to consider: 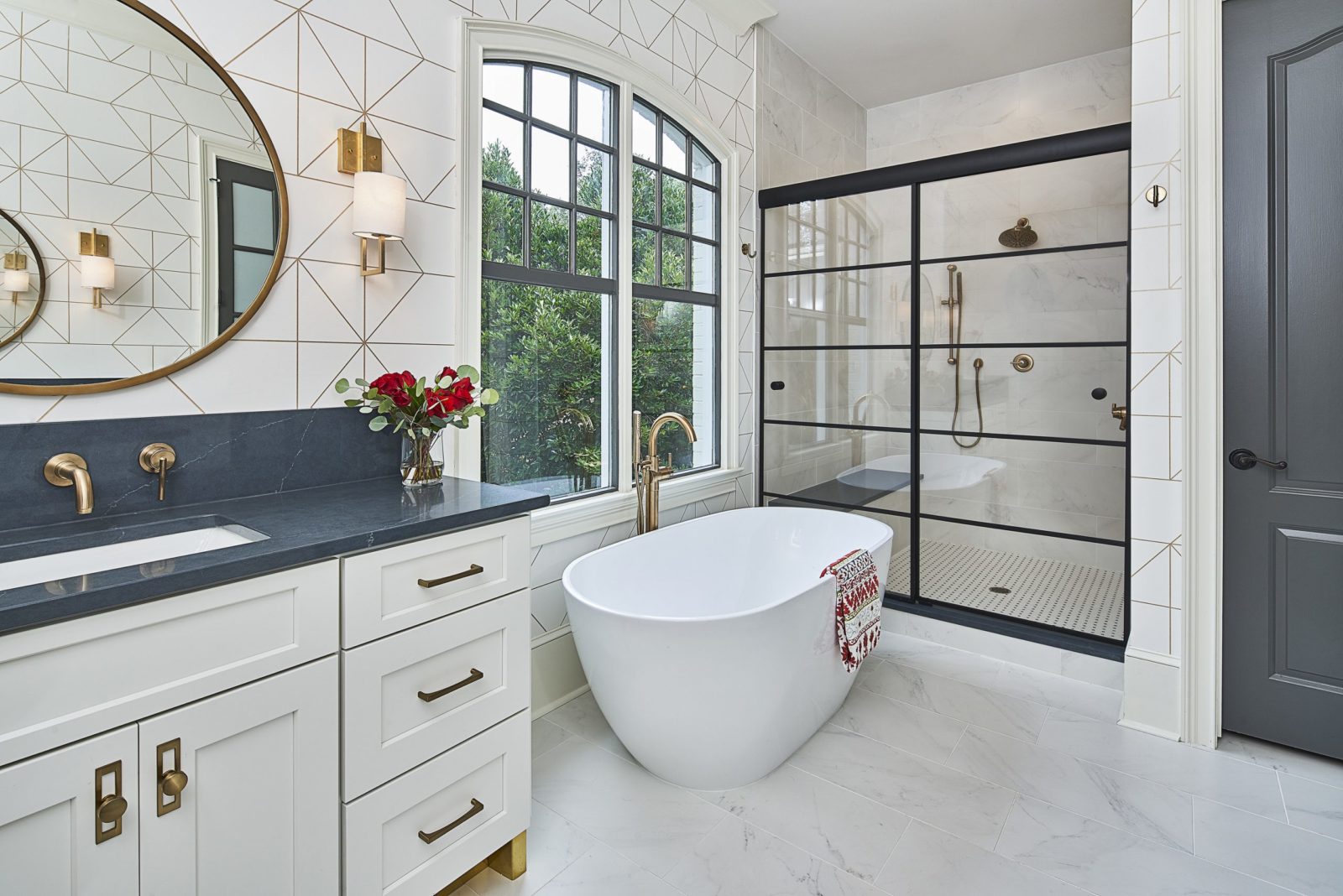 Whether you’d like to incorporate one or two of these upgrades in your redesigned shower, or all of them, we’d be happy to speak with you about your options. Schedule a call with us today to get started!