This growing family of four lucked out when they scooped up this beautiful Fort Mill spec home as a foreclosure shortly after the housing crisis. Unfortunately, there were a lot of things wrong with it and a long list of features that just didn’t make sense. Determined to create the home of their dreams, they began tackling one large project at a time over the course of several years. After expanding their outdoor living spaces, updating their main suite, optimizing the laundry room, and redesigning their daughters’ bathroom it was finally time to tackle this kitchen remodel in Fort Mill, SC.

Located between the main staircase and a long, narrow hallway, the kitchen sat somewhat detached from the main living spaces. It was dark, dated and covered in brown, but the worst part was the tiny, home plate shaped island that was constantly leaving bruises on their hips.

Since opening up to the family room wasn’t practical given the location of the staircase, we created a semi-open feel by widening the cased opening into the hallway. There had been a small drop zone there previously, but it didn’t feel like part of the kitchen space and just collected clutter. By opening up the wall separating it from the kitchen and giving the drop zone a new purpose as a beverage bar and coffee station, it quickly became a functional extension of the kitchen space. The interior LED cabinet lights make the cabinet glow, creating a feeling of spaciousness. 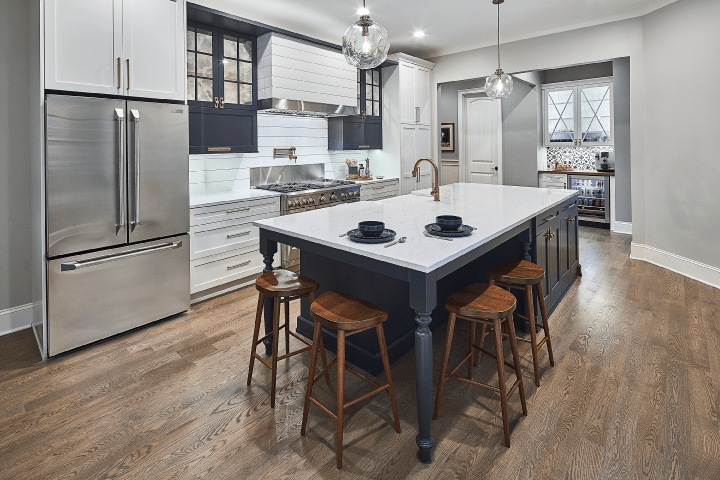 “We’ve used ReVision Design for four projects, most recently a kitchen remodel. The design, support and communication from our lead craftsman was incredible. The project was completed in eight weeks, which was incredible given the scope of work. We highly recommend ReVision and look forward to working with them on future projects in our home!”

The simple layout sprinkled with unpredictable design elements keeps this kitchen interesting. Traditional finishes like the white cabinets, antique mirror and glass pendants provide warmth against the cooler tones of the dark gray island and stainless steel appliances. The casual, linear nature of the shiplap backsplash and custom range hood keep this kitchen design down to earth and approachable, while also creating a sense of width and visual expansion. 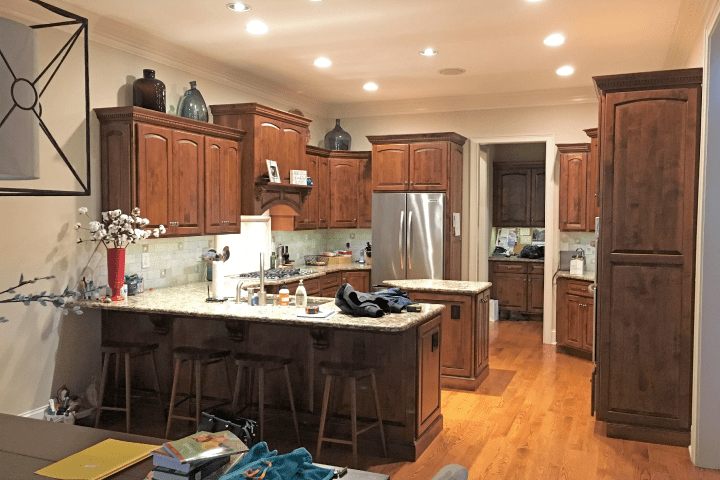