When this young couple bought their 1959 split level home in Mountainbrook, they knew right away they would need to remodel the kitchen, and soon, as they were expecting their first child. With many original features, including a tiny, inoperable wall oven, and a compartmentalized floorplan, the main level of this home wasn’t functional for a modern family. First up on the demolition list was removing the walls separating the kitchen, sunken living room, and dining room to create an open floor plan suited to conversation. Since the living room was lower than the adjacent spaces, there needed to be some division between them. Instead of eliminating the walls completely, they were cut down to half walls, and the length altered to fit their large sectional sofa, giving it a built-in look. Part of the wall removal involved the elimination of a closet that housed HVAC components, so a small portion of wall was left behind for the thermostat and venting. The decorative paneling and floating shelves on the dining side anchor it within the open space.

For the split level kitchen remodel, it was important to maintain a proper entryway, so the original slate tile floor remained to distinguish the foyer as its own area, even though the door to the kitchen was removed in favor of a wider opening. The kitchen floor tile, and carpeting in the living and dining rooms was replaced with site finished hardwoods to create cohesion between the larger open spaces.

Being proactive, this couple had already made their appliance selections prior to our partnership, so it was important to come up with a design to fit the models they’d already purchased. The built-in refrigerator, beverage center and dishwasher are made less obvious by custom cabinetry panels, while the microwave drawer is hidden next to the refrigerator.

The shape of the space proved challenging, as the kitchen and dining rooms formed a trapezoid shape with a long exterior wall at a unique angle. Additionally, the large asymmetrical windows provided very little space for wall cabinets. Previously, there had been a wall of dropped cabinets forming a peninsula between the two sets of windows. The kitchen was on one side and the breakfast nook on the other, further segmenting the space. To maximize space, traffic flow and storage, while maintaining an eat-in kitchen, the peninsula was removed to double the size of the kitchen overall. Casual seating was incorporated in the new central island. Custom cabinet modifications and floating shelves allowed us to utilize the wall space available without having to modify the windows and the original exterior stone.

Ultimately the vision this couple had for their growing family was realized as we redesigned the space to suit their needs for today, while respecting much of the original architectural elements that make this split level home unique.

“We are extremely pleased with our recent split level kitchen renovation by ReVision Design/Remodeling. Their imaginative design ideas blended well with our vision to create a unique, functional space. The team was top notch and exceeded our expectations throughout the entire process with their preparation and execution. Their attention to detail and constant communication was greatly appreciated and showcased their professionalism. We highly recommend ReVision to anyone looking for a major home renovation and will definitely use them again in the future!” 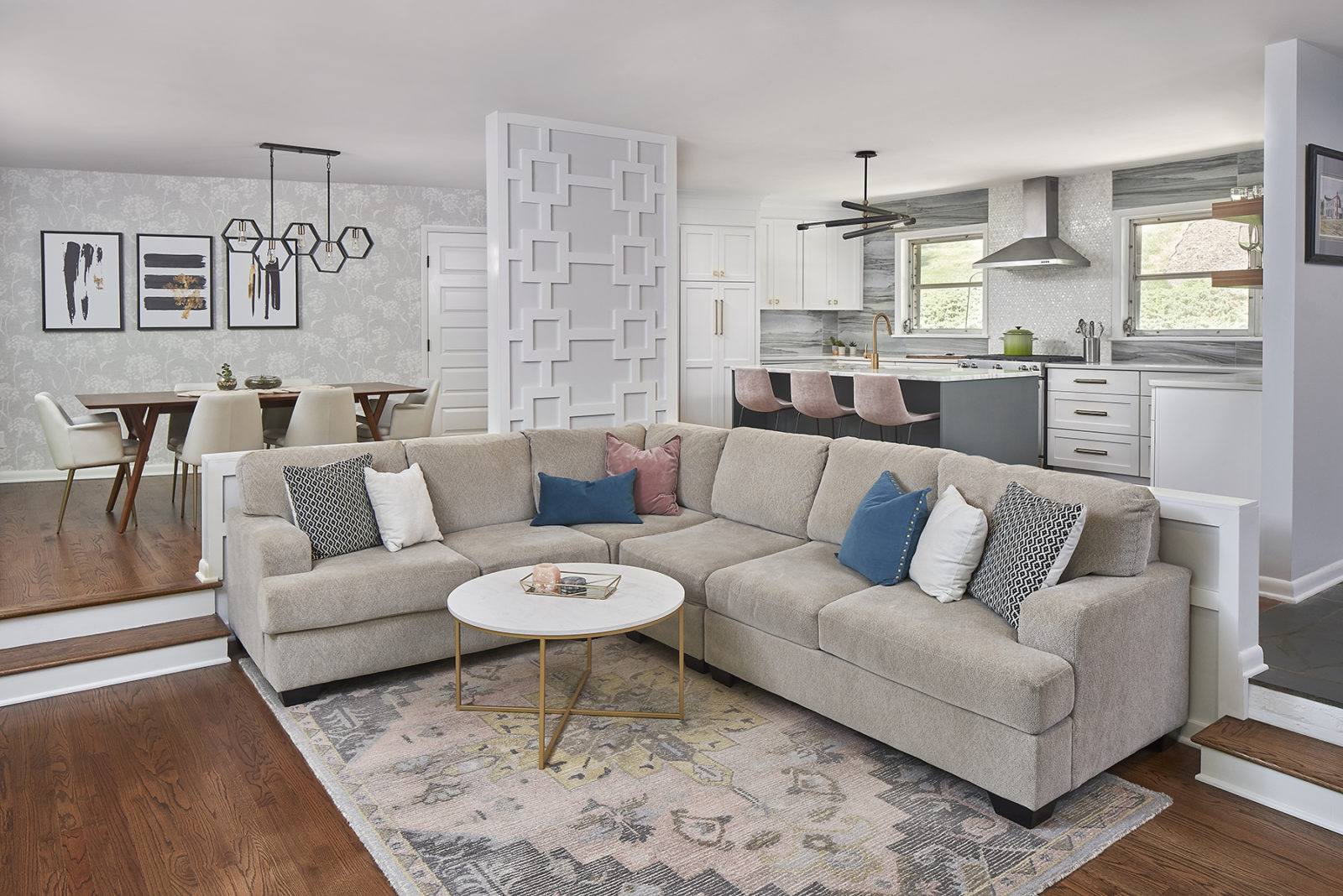 A contemporary, but neutral color scheme of white, grey-green and warm wood tones repeats throughout this split level kitchen remodel and living space. Brushed brass, and matte black accent metals echo the mid-century vibe of the home, while shaker cabinets keep it fresh for today. A polished marble slab was chosen for the island to act as a focal point, along with a mother of pearl backsplash that shimmers behind the range.

Low maintenance quartz countertops and large format porcelain tile backsplash in a complimentary shade take up the high traffic areas meaning easy clean-up for this growing family. Crackled glass front cabinets at the bar introduce a subtle texture reminiscent of old glass, while the wood grain laminate on the floating shelves harkens back to the melamine that was popular around the time this split level home was built. 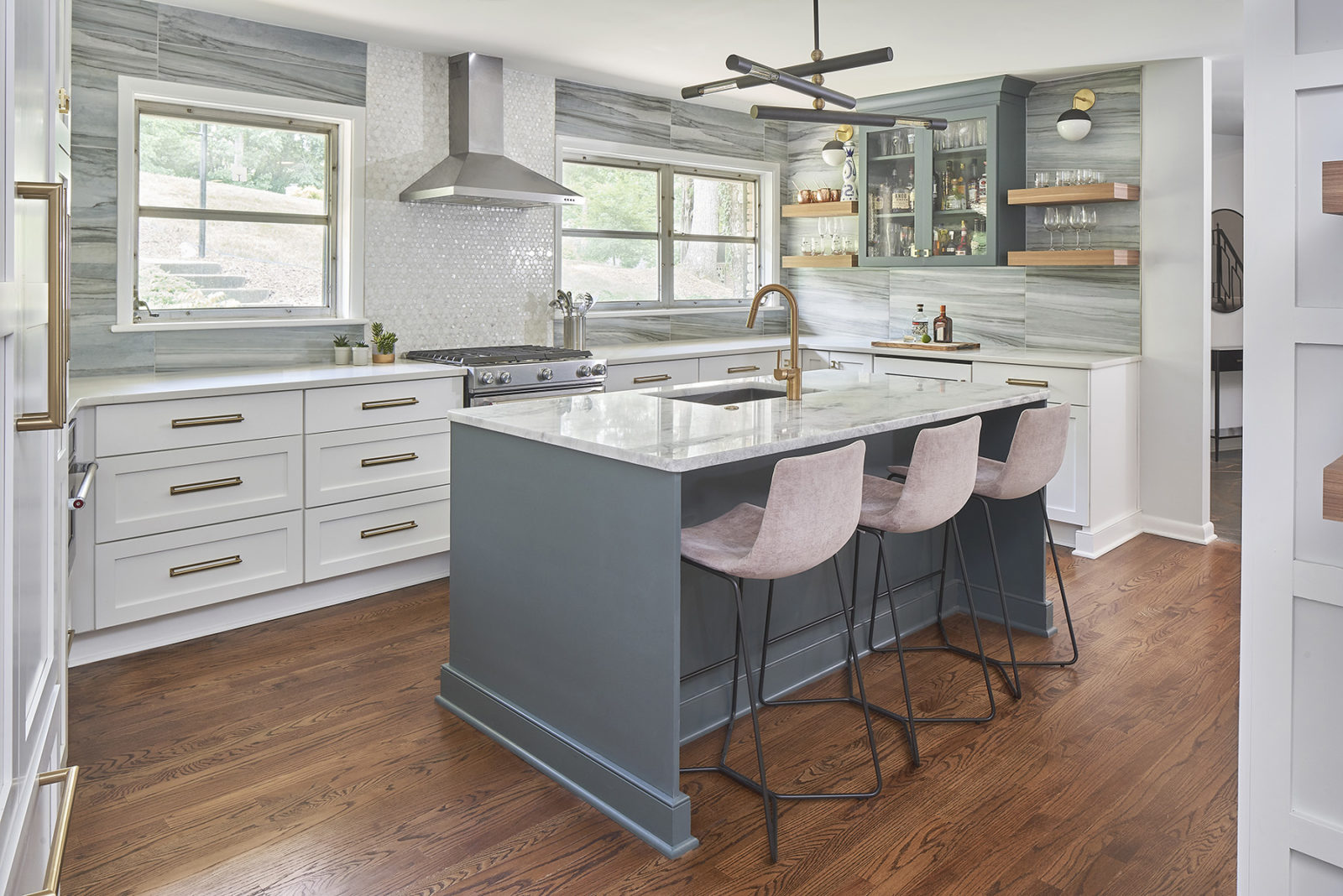